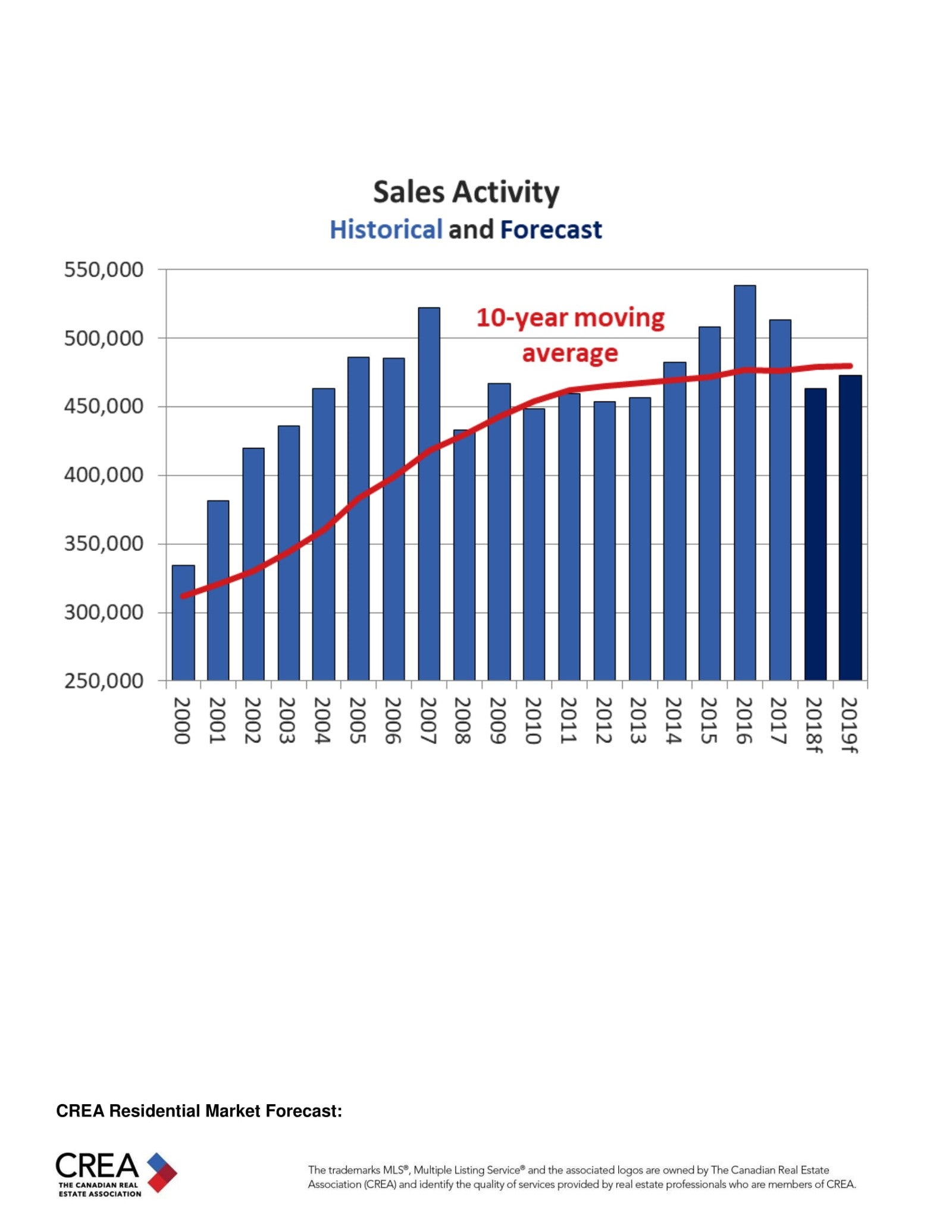 Economic and demographic fundamentals remain supportive for housing demand in many parts of the country; however, policy headwinds have impacted homebuyer sentiment and access to mortgage financing in many housing markets. Further expected interest rate increases, combined with this year’s new federal mortgage stress test are expected to continue to keep home sales activity in check over the rest of the year and into 2019.
When the new mortgage stress test was announced last October, it was expected that many homebuyers would precipitate their purchases during the two-and-a-half-month window before it took effect this year. In reality, the response to the new policy was stronger than expected. In December 2017, seasonally adjusted national home sales surged to the highest on record before dropping sharply in early 2018.
With much of 2018 now in the rear-view mirror, the stress-test on all new mortgages continues to weigh on home sales. National activity is on track to hit a five-year low in 2018. While summer sales activity in and around the Greater Toronto Area showed signs of rebounding, this trend may be losing steam. Moreover, additional interest rate increases expected this year and in 2019 will continue to raise the bar that borrowers must clear to qualify for mortgage financing.
Taking these factors into account, national sales are expected to decline by 9.8% to 462,900 units in 2018. The revised national forecast is little changed from CREA’s previous forecast published in June, with stronger than expected activity in Ontario offsetting weaker than anticipated activity in British Columbia. Both provinces are nonetheless still projected to post double-digit declines in sales activity this year and account for most of the national decrease.
Sales in Alberta and New Brunswick have also been somewhat stronger than expected in recent months, resulting in an upward revision in their 2018 sales forecasts. Activity in both provinces should moderate over the balance of the year compared to levels this summer.
The national average price is projected to ease to $494,900 this year, down 2.8% from 2017. As per CREA’s previous forecast published in June, the national average price decline reflects fewer sales transactions in B.C. and Ontario in 2018; however, the forecast has been revised lower as a rebound in British Columbia’ sales activity so far remains absent.
The national average price is expected to be skewed lower by reduced sales activity for higher-priced homes, with provinces posting a smaller average price decline compared to the national result. Indeed, more than half of all provinces are projected to see average price gains in 2018, including British Columbia.
The average price decline forecast for Ontario (-1.7%) largely reflects fewer higher-priced home sales in Toronto, particularly during the important spring market which normally sees a seasonal jump in the average price but failed to materialize this year.
Meanwhile, home prices in Eastern Ontario, Quebec, New Brunswick, Nova Scotia and Prince Edward Island are expected to continue rising following steadily firming market conditions in recent years.
Home prices are projected to edge down by about 1.5% in Alberta, Saskatchewan and Newfoundland and Labrador. In these provinces, particularly in the latter two, supply is historically elevated in relation to demand.
In 2019, national sales are forecast to rebound modestly (+2.1%) to 472,700 units but remain below annual levels recorded in 2014 through 2017. The anticipated partial recovery in sales over the second half of 2018 from deferred purchases over the first half of the year – already evident in Ontario but not yet in British Columbia – is subsequently anticipated to fade over 2019 in tandem with further expected interest rates increases.
The national average price is forecast to rebound by 2.7% to $508,400 in 2019, reflecting modest average price growth in several provinces and the return of the normal seasonal pattern for sales and average prices in Ontario. Indeed, the forecast average price increase in Ontario (3.3%) is larger than for any other province in 2019. The average sale price in British Columbia is also forecast to rise but by less than the rate of consumer price inflation.
Market balance is continuing to firm in Quebec, New Brunswick, Nova Scotia and Prince Edward Island. Further modest price increases in these provinces are forecast in 2019, although price gains should be held in check by rising interest rates. Meanwhile, prices are forecast to remain stable from 2018 to 2019 in Alberta, while further edging down in Saskatchewan and Newfoundland and Labrador. 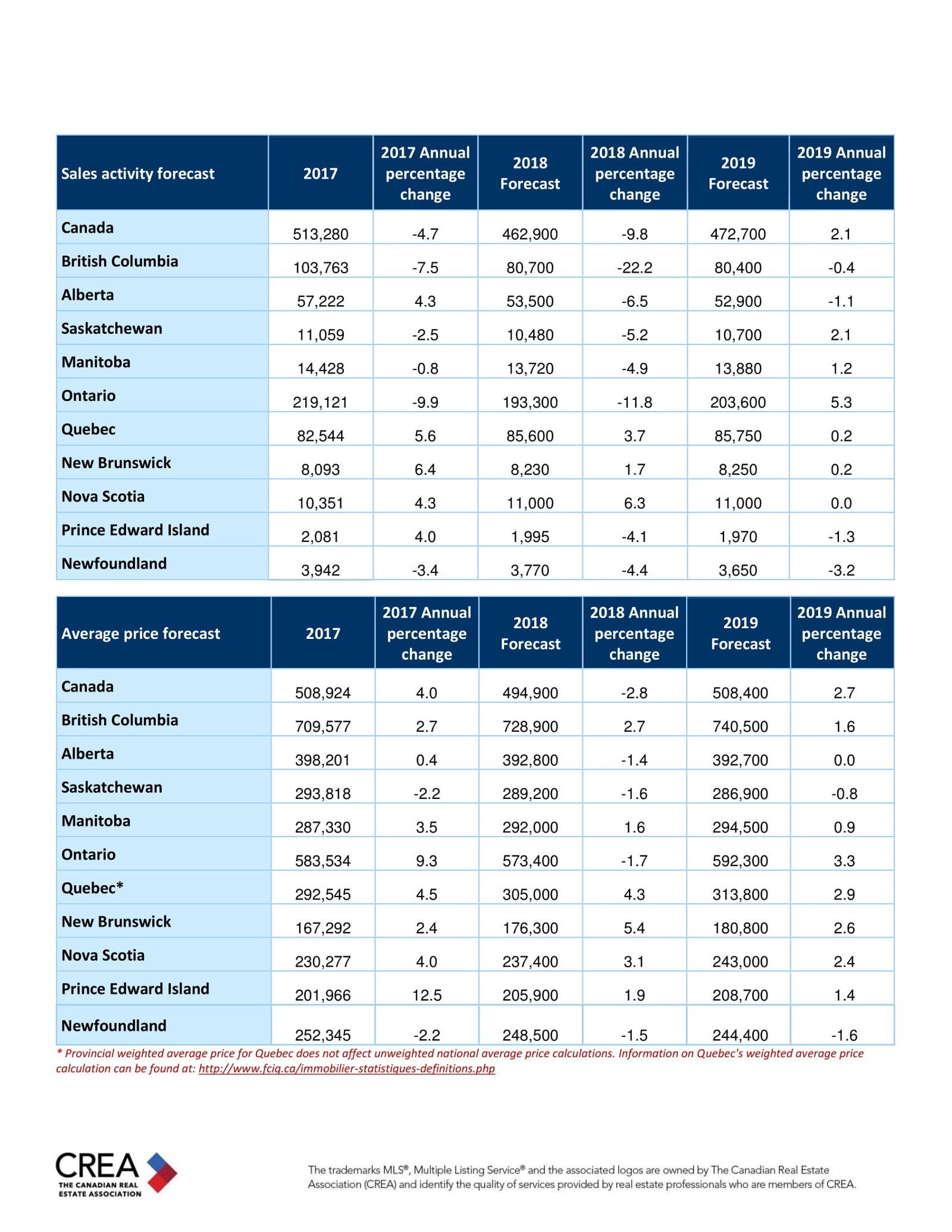