Interest rates are about to go up in Canada — no, for real this time

After almost a decade of warnings that never came to pass, it appears as though the Bank of Canada is ramping up to hike its benchmark interest rate — possibly as soon as next week.On July 12, Canada's central bank will announce its latest decision on where to place its trend-setting interest rate, which has an impact on the rates that Canadian borrowers and savers get for their bank accounts, mortgages and other products.Eight times a year, the bank's board of governors meets to assess the latest economic indicators and decide whether Canada's economy needs a shot in the arm from a rate cut, or a pump of the brakes by way of a hike. And for the first time in 54 such meetings, it's looking like the latter is in order.It's not like there haven't been warning signs. By the time Stephen Poloz was named to replace Mark Carney atop the bank in 2013, the central bank had already been on the sidelines for more than two years, its benchmark interest rate set at one per cent. 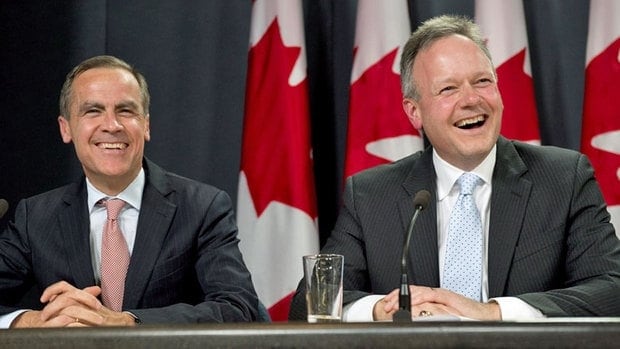 Since Stephen Poloz, right, took over the helm of the Bank of Canada from Mark Carney, left, in 2013, the bank has yet to raise interest rates. (Adrian Wyld/The Canadian Press)
But even as the bank kept loans cheap coming out of the financial crisis, the messaging from the top came early and often that Canadians should be forewarned — rates have to go up eventually.As far back as 2014 Poloz warned Canadians that rates would rise "soon" — before oil's plunge in 2015 caused the bank to lose its nerve. Instead, the central bank moved in the opposite direction, cutting rates twice that year to bring its rate to 0.5 per cent, where it currently sits.At the time, those hikes were described as a temporary measure to help a Canadian economy that had been waylaid by an oil price that lost more than 70 per cent of its value in a matter of months. But in recent weeks the bank has started leaving clear signals that despite oil still being in the $40-per-barrel range, those temporary conditions are over and it's time for a return to normalcy.It started on June 12, when senior deputy governor Carolyn Wilkins told a Winnipeg audience that Canada's economy was starting to "pick up" and was showing signs of "moving past" the oil shock.That prompted speculation that the bank was ready to take its foot off the gas, a notion that was reinforced by a number of pronouncements since then. Poloz told U.S. financial network CNBC this week that "those cuts have done their job." That may not sound like a ringing endorsement, but economists who monitor the bank say it marks a sea change in messaging."If they think those cuts have done their job," BMO economist Doug Porter told CBC last week, "now they can reverse them."He's not the only one who expects a rate hike. It would be "imprudent to ignore the aggressive communication shift we have seen from the Bank of Canada," Manulife's senior economist Frances Donald said.Since Wilkins's speech started the speculation, the bank has had more than one chance to walk down those expectations, if it felt her comments were misinterpreted. The fact that the bank hasn't done so speaks volumes, Donald said.Currently, bets on the bond market imply there's about a 60 per cent chance of a rate hike next week, something the Canadian economy hasn't seen since September 2010.While nobody's expecting anything more than a slight 25-point ratcheting-up of the rate to 0.75, the symbolism of such a move is huge. Spurred on by cheap lending and housing prices that have been defying gravityfor the better part of a decade, Canadians are now more in debt than ever before. Canadians now owe $1.67 for every dollar in income they earn, official data show, and the typical borrower now owes more than $22,000 — on top of their mortgage.Technically, the Bank of Canada's mandate is to manage inflation, not worry about debt loads. But a major move to interest rates would be catastrophic with debt loads sitting so high, which is why the bank seems to be warning borrowers that they're going to slowly start taking away the punchbowl from homebuyers who've overindulged.As BMO economist Benjamin Reitzes put it, the "desire to instill a bit more discipline in the housing market," is clearly in the back of the central bank's mind while telegraphing their change of heart.Scotiabank economist Derek Holt is among those who thinks a hike is coming next week, and maybe even another one before the year is out. Otherwise its own pronouncements may have painted the bank into a corner, he says. "The Bank of Canada is going to have a serious credibility problem if it fails to raise interest rates … after providing such an aggressive turn in communications starting one month to the day ahead of the July meeting," Holt said.